Allow us to fight for you
Reach out today!

The False Claims Act, 31 U.S. Code § 3729-3733, is a tool for private citizens to stop fraud and abuse, and assist the federal government in recovering ill-gotten gains from corporations who defraud the taxpayer. Our clients collect substantial rewards for blowing the whistle.

How to Become a Whistleblower

If you suspect a corporation, nonprofit, or municipality is defrauding the federal government, and you have non-public information regarding this alleged fraud, then you may become a whistleblower. To collect a whistleblower reward, you must collect relevant information and documentation to prove the fraud scheme. If you, as a whistleblower, are fired or have an adverse action taken against you, then you also have a retaliation claim against your employer.

Once you have collected sufficient documentation to prove the fraud, set up a meeting with us to determine whether there is a basis for a lawsuit, we offer free consultations and will take the time to review your case in detail. The more detailed and organized a whistleblower is in presenting their information to us, the faster a qui tam action can be filed, which is important because only the first whistleblower to file may collect a reward. 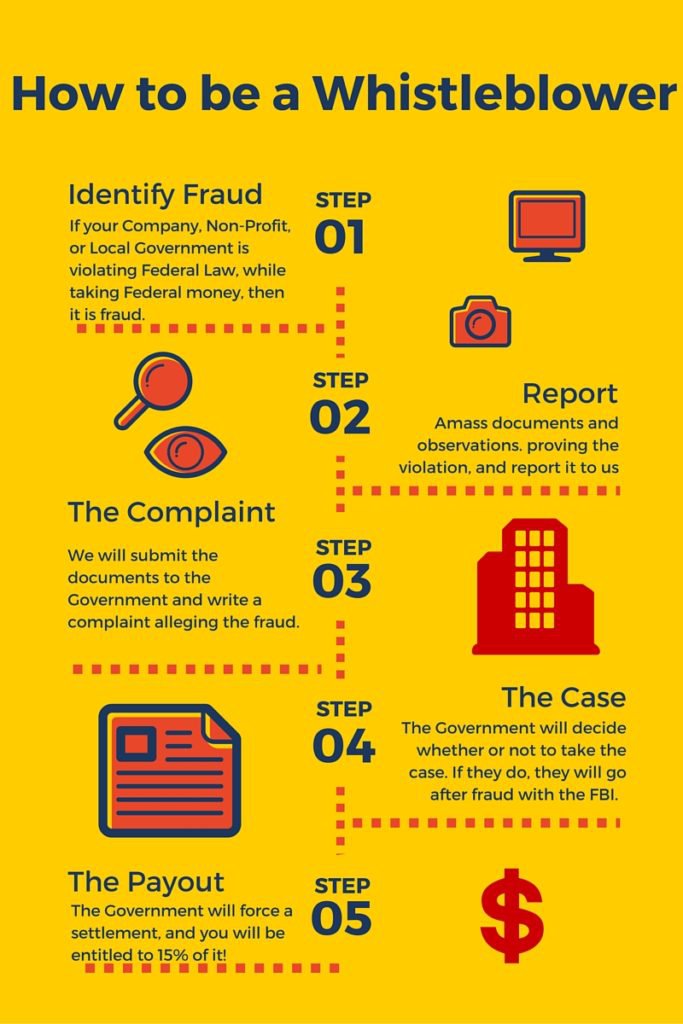 If we accept your case, then we will initiate a qui tam action on your behalf on a contingency fee basis. These are the basic steps of a qui tam action: (1) you gather the information about the fraud, and we help you disclose it to the government; (2) we will file a complaint under seal with the Federal Court that has jurisdiction; (3) the government will decide whether to take your case; and (4) the government either takes your case and settles it with the perpetrator or denies it. If the government decides not to take the case, then you may continue to prosecute it on your own with our assistance.

Once the complaint is filed, and under seal, it’s the existence or its allegations may not be disclosed to the public. Otherwise, the case may get dismissed. It may take a year or two for the government to decide whether to take the case. If the government takes the case, the chances of recovery are high. If the government wins or settles the case, you will be entitled to 15% to 20% of the recovered amount.

If the government decides to not take the case, then we are prepared to prosecute the case ourselves. If we win or settle the case, you will be entitled to 25% to 35% of the recovered amount.

Warner Mendenhall’s experience with qui tam actions dates back to the early 90s after the False Claims Act was amended to make it more accessible for whistleblowers. Since then, he has settled multiple qui tam actions against healthcare companies like Mobile Medical, Inc., and St. Jude Medical Inc. over the years. Since Logan Trombley and Brian Unger have joined the firm, the Law Offices of Warner Mendenhall have increased their qui tam practice dramatically. We now file on average, 5 - 10 cases a year throughout Ohio and the United States. Our firm files the majority of qui tam actions in the Northern District of Ohio for fraud schemes originating in Cleveland, Akron, and Canton. We also regularly file qui tam actions in the Southern District of Ohio for fraud schemes originating in Columbus, Cincinnati, and Dayton.

Tell us about your situation and request a free consultation